Why is employment still lower than it was three years ago?

Total employment in the UK fell following the pandemic and still has not recovered to pre-pandemic levels. The red line in the figure below shows that in August 2022, employment was still over 300,000 lower than it was pre-pandemic. The culprit for this reduced employment is increased economic inactivity (people not able to work or not actively looking for work) rather than unemployment (people actively searching for work). 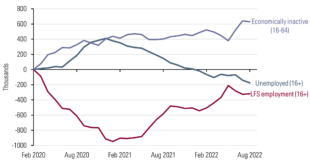 This increase in inactivity has caused a flurry of analysis, including useful contributions by the IFS, IES and the Resolution Foundation [2],[3],[4]. The increase in inactivity has been more marked amongst older workers and workers without a higher education, as shown in the figure below. Students and long-term sickness are the two reasons for inactivity which have seen the biggest increase since 2019. Despite this, the IFS and others find that increased retirement is a more important reason for the increase in movements from employment to inactivity than increases in ill health. 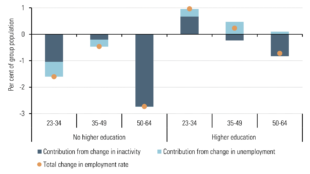 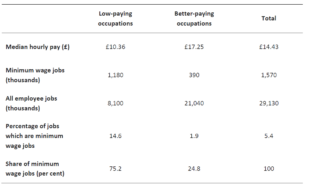 In our analysis last year, we investigated the effects of increased inactivity on low-paying occupations. We track the movements into and out of jobs between 2019 and 2022 for those aged 23 to 64. We compare the total number of moves in 2019-2022 to the previous three-year period (2016 to 2019). The table below reveals a complex picture. 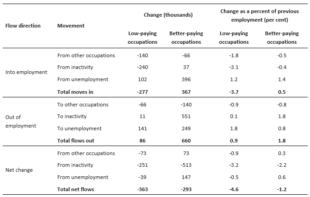 However, increased inactivity is not just due to more people moving out of employment, movements the other way matter too. During the last three years, fewer people moved into low-paying occupations from inactivity. Low-paying occupations are more likely to require interpersonal interactions, so the reluctance of workers to move into these occupations could reflect continued health concerns. Barrero et al. (2022) [7] document evidence that “long social distancing” in the US is reducing the employment rate by up to 2 percentage points. They find that it disproportionately affects low-paid jobs which involve interpersonal interactions. It is possible a similar trend is affecting employment in the UK.

What does increased inactivity mean for pay in low-paying jobs?

Increased inactivity, alongside other factors such as changes to migration policy, has made it harder to recruit into low-paying occupations. Vacancy rates have hit record highs in hospitality and social care. We also heard that employers have been relying more on younger workers to fill vacancies.

Some employers in low-paying occupations have raised pay to try and attract workers. UKHospitality told us last summer that: ‘The workforce supply crisis has led to substantial increases in basic rates of pay with intense competition between firms…We are seeing many firms having joining/starter rates of pay well above the statutory minimum.” We can see the increase in pay for low-paid workers in the data. The number of jobs paid the minimum wage fell by 21 per cent between April 2019 and April 2022, despite the minimum wage increasing faster than prices (measured by CPI) or median hourly pay over this period. [1]

The government is right to worry about increased inactivity. It has many negative effects.  However, for people still working it may have some benefits. The reduced availability of workers is one factor that has raised pay for the workers left behind (especially those in low-paying occupations).

We discuss these issues in more detail in our 2022 report.

[3] Wilson, T., and Muir, D (2022) Evidence paper to support the launch of the Commission on the Future of Employment Support Institute for Employment Studies