The LPC is seeking evidence on the experiences of low-paid workers from ethnic minority backgrounds. Contact us if you want to provide evidence.

Alongside the usual work of monitoring the minimum wage and recommending next year’s rates, the Government’s 2021 remit letter to the LPC made a new request, not included in recent years. This was to gather evidence specifically on the impacts of the minimum wage on ‘low paid workers with protected characteristics’.

“Groups more likely to be affected by changes to the minimum wage rates include younger, older, disabled, and women workers, and workers of ethnic minorities.”

The incidence of low pay varies across society and, as the quote above implies, you are more likely to be on the minimum wage if you are a woman, a disabled worker or a member of certain ethnic minorities. None of these characteristics are a sole determinant; the likelihood of being paid the minimum wage will be affected, among other things, by where you live, the industry you work in, your age, qualifications and skills. But there is a relationship between these characteristics and low pay, which we have to be conscious of when we make our recommendations, and when we think about the effects of a rising minimum wage across society.

Analysis by some protected characteristics – for example, gender, age, disability and ethnicity – has always been part of our approach to monitoring the impact of minimum wages. But it has been a while since it has been a formal part of our remit and we are pleased at its return. Until the start of the Covid-19 outbreak, employment rates among groups with those characteristics remained strong, increasing faster than for the wider population. We are confident that, from 2016 to 2020, the rising National Living Wage did not adversely affect these groups.

The pandemic, however, has upended the labour market; despite the support of the CJRS, large numbers of jobs have already been lost in some sectors. Meanwhile, it has become clear that the economic and health impacts of Covid-19 have fallen disproportionately on workers from ethnic minorities, and that this was at least in part to do with over-representation of these individuals in certain professions (see references below). In addition to this, the killing of George Floyd and increased prominence of Black Lives Matter in the summer of 2020 drew greater attention to racial inequality. It is against this backdrop that we are seeking to expand our evidence base on low pay and ethnicity. 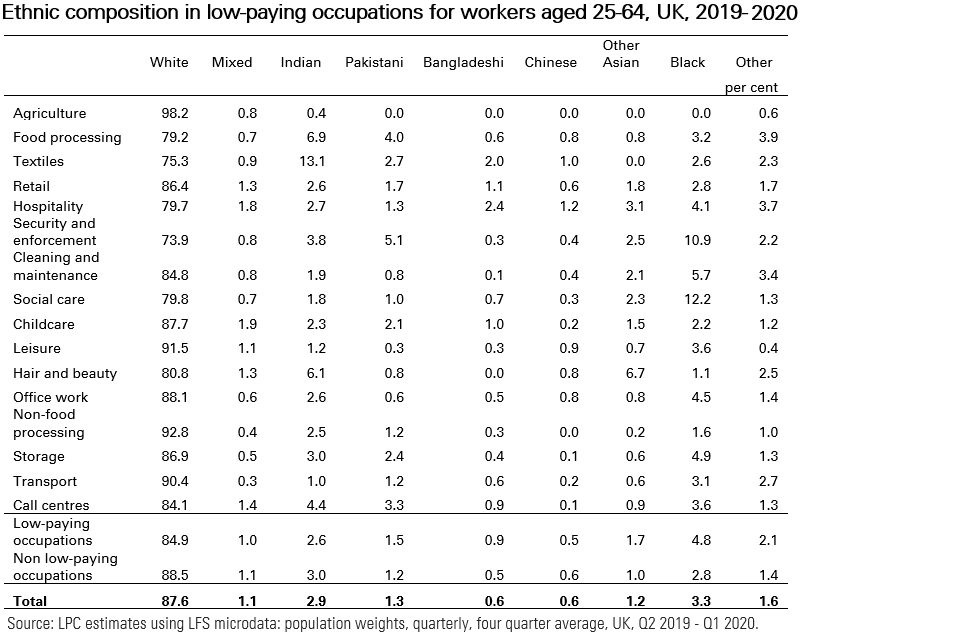 How we are responding to our remit

In response to our remit, we are working to improve the quantitative and qualitative evidence base on the relationship between low pay and ethnicity. As part of our research programme, we have already commissioned innovative new work from the London School of Economics, looking at the impact of the minimum wage by ethnicity, disability and gender. We are expanding our own internal analysis to draw more from our key data sources. But equally important is the effort to hear first-hand evidence from low-paid ethnic minority workers and business owners.

We most often speak to workers as part of our UK-wide visits programme, and the workers we meet depend largely on where we go in the country. For example, in smaller towns or rural locations, where minimum wage coverage is higher, the population tends to be less diverse and low-paid workers are more likely to be white. More diverse populations are concentrated in larger cities, which have high numbers of minimum wage workers but lower overall coverage. As part of this year’s programme of virtual visits, we are focusing on London, Sheffield and Manchester, all places with diverse communities.

We are also interested in hearing from groups anywhere in the UK who represent or work with minority communities – these could be charities, community groups or any other interested parties. We would like to hear about people’s work, pay and experience in low-paying sectors, in line with our consultation.

Whilst we have already started reaching out to businesses and organisations who employ or represent people who fall within the category of these characteristics, it is not possible for us to reach everyone. For organisations or businesses who would be interested in providing us with feedback on their experiences, please contact lpc@lowpay.gov.uk.

Office for National Statistics. Why have Black and South Asian people been hit hardest by COVID-19?. 14 December 2020